Inspirations………One Leads To Another, and Another!

Tara and Her Dog Named Stella

I wanted to tell you what a GOOD girl Stella was on Sunday at Avista. The upstairs patient floor was busier than I have ever seen it on the weekend and everyone was very excited to meet Stellaluna! The nurses kept running up to us and giving her rooms to visit. In one room she was surrounded by 3 little kids who petted and hugged her for at least 20 minutes. She would sneeze or make a funny noise, and they would laugh at her and her tail would just start wagging like crazy. She also visited with at least 4-5 adult patients, and she was so good about getting in a chair and letting me push her over the bed to visit. She would just nuzzle their hands and let them play with her ears, and she seemed SO happy! She also sat with a little girl while she did her breathing exercises, and when the nurse unhooked the oxygen it made a VERY loud noise that startled me, but not Stella. She was such an angel, and I don’t think her tail stopped wagging the entire time she was there. I am so grateful that we had the opportunity to get her started as a therapy dog. Thank you so much, Daryl! And I am so glad I didn’t take the vet’s advice of not visiting with Stella (the vet who performed the Behavioral Exam on Stella) as doing so would have not even given her a chance. If it wasn’t for your advice, plus Jan and Margaret’s advice, I would have been talked out of pursuing this therapy dog work with Stella. I am so grateful to you for helping my dad, me, Buddy and Stella through everything. Thank you so much. 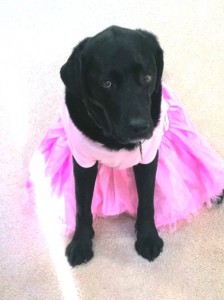 This is such a wonderful story that I asked Tara’s permission to share it in one of Tilda’s Blogs. Tara and her Father, Al, both work as therapy dog handlers at two Boulder County hospitals. They started with their good dog named Buddy. Buddy is a black lab and just a peach of a fellow. He is the type of dog that loves everyone and always happy to see people on his rounds at the hospitals. A few months ago, Al had mentioned that maybe their other black lab named, Stella, might be a good therapy dog but that she was really an excited dog when meeting new people and sometimes was a bit shy. Luck had it that we had an opening in the class we were conducting at that time because someone had to drop out due to a personal emergency. I asked Al if he wanted to try Stella in class as this would be a perfect opportunity if he was interested. He discussed it with Tara and they were thrilled about maybe giving Stella a try. In class, Stella was a good girl but she was indeed really excited to meet all the new people and dogs. However, Tara and Al did a wonderful job of keeping Stella focused and it could be seen that Stella definitely had some great potential for being a therapy dog. Stella had a good heart mixed with a very loving character about her. 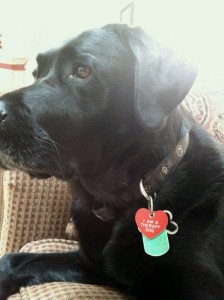 After class, each dog needs to be examined for proper behavior called a Behavioral Exam. On Stella’s vet visit day, she was not thrilled with the idea of the new vet facility with all the smells and was very shy around the vet. There was no show-stopping negative issues found with Stella……no growling, barking, nipping, biting……..none of the items that would disqualify a dog. Stella was just extremely nervous which caused the vet to think that maybe this dog wasn’t cut out for doing therapy dog work and without knowing the dog, it was simply an opinion. Of course when the vet shared this with Tara, it broke her heart as she had high hopes for Stella. But the vet did approve the exam and passed Stella with notes of what was witnessed which was the proper action on the vet’s part. Tara contacted Jan, Margaret and myself right away wondering if she should remove Stella from the program. Our advice was to trust in the dog and give it a chance by actually visiting a few times to give Stella a chance at her new career and to focus with concentration on Stella and let her know that you are there to support her, guard her, keep her safe and to blend in with her to work as a team to perform the tasks at hand. Once a dog gains that confidence, it will usually begin to do some amazing things all on its own. Our best advice to Tara was to not worry about the vet exam, but to concentrate on Stella and keep telling her that you are going to give this a try and work it as a good team. 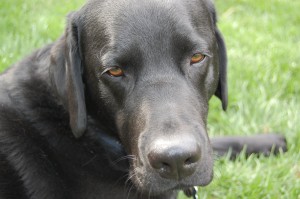 From Tara’s letter, I would say she did exactly that and did it magnificently. Obviously Stella has a good bond with Tara and once the focus began on each other, things started to come forth. It is such a wonderful event for me to read letters like this one from Tara. These dogs are wondrous creatures capable of some tear jerking moments that can bring about a peaceful calm and a loving solitude to some patients who had nothing going for them but to feel those feelings on that particular day. I know for a fact most dogs have this instinct inside of them and the amazing part is they know when it is needed. They just have to know that we know it’s there and to believe in them to get the job done. It doesn’t happen overnight, but with that good dog, Stella, it came about pretty fast.

Good work, Tara! Good work, Stella! Good Work, Al and Buddy. My guess is there will be lots more stories to come from this four-some.

I read your latest blog about Drambuie and it inspired me to take Molly to Boulder Community Hospital on Christmas Eve. I have always signed up for Christmas Eve duty at the hospital, but this year we were really “snowed in” (we got about 2 1/2 feet of snow and our road is virtually impassable, even with plowing ) – so, I wasn’t terribly eager to get in the car and go in to Boulder. However, after reading the Buie story and your thoughts about why we do therapy work, I decided to make the effort and go.

It turned out to be a magical evening at the hospital. I only visited about 10 rooms, but each visit was significant in its own way. Only one of the patients had any Christmas decorations in their room and only one patient had any visitors, so I think that our brief visit made a difference to each and every patient. Thank you SO much for inspiring (and reminding me) about why the time, money, and effort is so worthwhile! I also liked your observations about “coincidences”- so many things lined up on Christmas Eve that made good things happen at the hospital- really makes one wonder about such things!

My best to all of you in the new year. Love hearing about how Sissy is coming along. She sounds like a real “keeper.” 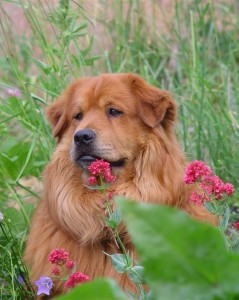 Emily and Molly also visit two different hospitals with their therapy dog work and have been doing such for many years. They are a very experienced team and I am sure have seen lots of wonderment that probably has provided more questions than answers. I asked Emily if I could print her letter above and asked her to share some of those Christmas Eve experiences when she has time. She said her computer is acting up at present and as soon as that is resolved, she will write some of the Christmas Eve experiences her and Molly had. That is the way the lessons learned from therapy dogs work. That wonderful dog named Drambuie inspired me to write about his connection with a patient that touched my heart and I am sure it also touched many hearts of people reading about it. That inspiration gave birth to another set of events for Emily and Molly causing them to be inspired enough to get out on a nasty night of impassable roads and make the effort to do something kind and meaningful for others who had to spend Christmas Eve in the hospital.

And last, but not least, Thank You, Tilda!