I received a phone call recently from the Longmont United Hospital asking me to stop by and pick up Tilda’s Planetree Award medallion she had been presented from the Planetree conference in Nashville recently. Tilda was not the overall winner as she didn’t live long enough, but they presented her with a wonderful award. Tilda knew she was entered in this contest and I could tell she was very excited about it. She really wanted to go to Nashville, Tennessee in her truck back seat and get up on that stage with her tail waving “howdy” (just like she did on the old Boulder theater stage) while wearing her special kerchief to compliment her Nashville presence. You might remember reading her special submission essay to enter the contest. A lot of people at LUH worked hard to help Tilda with the best chance they could give her to win that contest for LUH. But, not too long after her story was submitted to the Planetree people, Tilda was diagnosed with her cancer crud. As if the sadness of this tragedy wasn’t enough, Tilda also knew that she probably wouldn’t be able to visit the hospitals anymore and that her contest winning fantasies would probably need to remain just that.

I will never forget the moments right after the vet at CSU gave us Tilda’s prognosis with Tilda at my feet paying attention to every word coming from the lady’s mouth. I had a 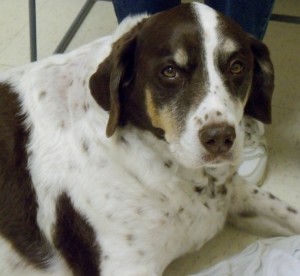 Tilda’s expression at CSU when she found out the bad news.

camera with me and couldn’t resist a photograph of that expression on Tilda’s face as the doctor spoke as it “said it all” in a nutshell. Tilda could understand things, maybe not the English, but she understood the aura or general tone of most conversations she was around. She may have been doing that by recognizing my feelings and emotions and interpreting them, I am not sure. I just could tell that she knew exactly the summary of what was being said.

Back to the Planetree Award….I did make the trip to Longmont United to pick up the medallion and it is beautiful. The medallion is attached to a gold neck ribbon that would have went around Tilda’s neck and the colorful display would have been striking with Tilda wearing it with her pink color and brown ears. Wouldn’t that have been fun walking through the halls and waiting rooms with Tilda wearing her prize? She would have been so proud and would have represented LUH very well with that very big smile on her face and tail waving like a flag.

There was also a photo of Tilda in the Planetree Conference book along with all the other contestants from all over the country. Her beautiful picture did LUH proud I think. Above my computer is one of Tilda’s calendars and presently it is open to January/February and her February photograph still makes me smile. It was a perfect snapshot of her personality by a photographer named Will at the Exempla hospital (Thank you, Julie). She already had cancer the day of that photo shoot and her side away from the camera had bandages and tumors at the time, but she was still smiling and doing what she loved best……posing for the camera. 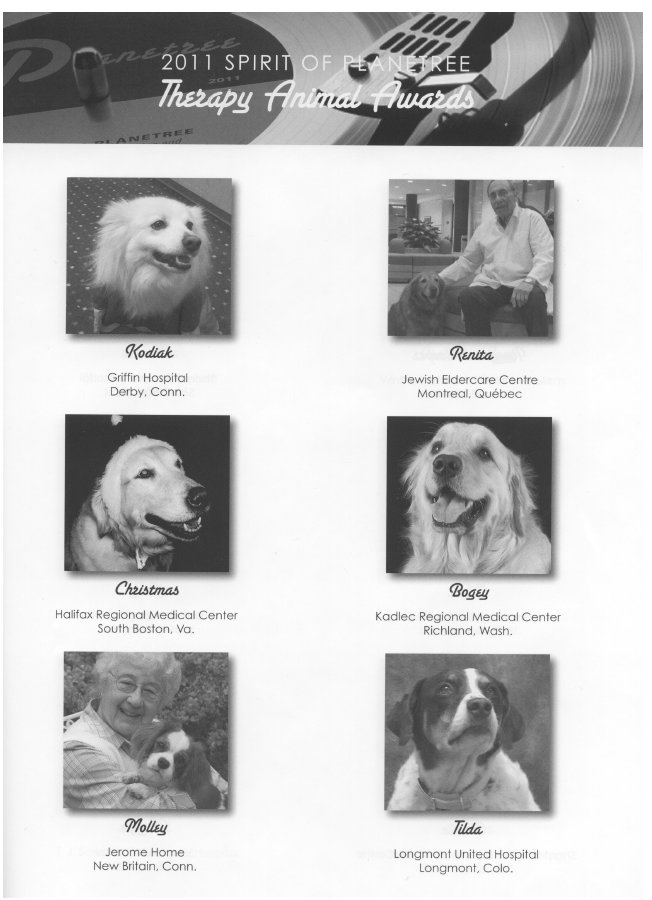 My personal thanks to Linda, Carol, Laura, Stacey, Fran, Jane & Joan at Longmont United for their part with Tilda in the Planetree event. An unpredictable chain of events came about that wouldn’t allow this to come to fruition, but I am sure Tilda is looking down with much pride for giving it a good effort while she good. Her gold ribbon with the Planetree medallion is now placed around her cremation box right over her pink collar and it looks awesome.

Tilda was also remembered in the Therapy Dogs, Inc. magazine that I received recently.  She was memorialized on the last page of the magazine along with Katie who was Jan Fincher’s darling Aussie.  Katie crossed her Rainbow Bridge this last year also.  Katie and Tilda were both registered with Therapy Dogs, Inc.  Jan and myself are also Therapy Dog, Inc Tester/Observers for the organization.  Special thanks to Billie Smith, Executive Director at TD, Inc, and all the rest of the folks there who are doing such a wonderful job with this organization.

While some say that all things come to an end at some point in time, I would prefer to believe that good dogs live on and on in our hearts, minds and our soul.  It is never pleasant to lose a good dog, yet the memories of all the special times, special deeds and special accomplishments are something we can hold on to forever and be proud of the fact we were able to witness what went on with these wonderful canines.  Tilda’s story never seems to be quite finished even though her physical presence is long passed.  She touched the hearts of many people who will never forget her as long as they live and I count myself as a loyal member of that Tilda Club enjoying all the experiences.  Of all the tributes Tilda has realized, may the best of all be that we never forget her and other good doggies like her.  They have worked so hard to bring a smile, a laugh, a few tears…….which allows our lives to be more complete and to be a better person because of them.

Thank you, Tilda!  May your spirit live on forever.