Once In A Blue Moon

I am so excited to tell this story.  It has the makings of the most wonderful Tilda Dog Blog ever.   On June 3rd, 2011, the Volunteer Services Directors, Coordinators and therapy dog program leaders from four Boulder County hospitals gathered in a private room in a Longmont cafe for a recognition celebration honoring Jan Fincher and her dog Katie plus Daryl Holle and his dog Tilda.   The hospitals represented were Avista Hospital in Louisville, Boulder Community Hospital in Boulder, Exempla Good Sam Medical Center in Lafayette and Longmont United Hospital in Longmont.

The purpose of the gathering was held very confidential.  Tilda and I knew something was going on as we were asked to show up at Chautauqua Park in Boulder to meet a portrait photographer in front of the Boulder Flatirons for a picture taking session.  We also received an invitation in the mail from Julie Adams, the Volunteer Director of Exempla Hospital, to show up at the cafe at 3 p.m. on June 3rd.  I questioned everyone in the Volunteer Office at each hospital as to what was going on and all I could get in response was “none of your business right now” or “you’ll have to wait and see” and many times absolute quiet followed my question.  Tilda even tried her best to break the silence by sitting up straight in front of the organizers and begging for an answer (and maybe a treat if she was lucky).  Nothing, no comments, absolute secret that was well kept.  If I ever needed to tell someone a secret, I know first hand it would be safe with these people.

At the celebration, Pat Dimond, who is the Volunteer Director of Boulder Community Hospital and also now President of the Colorado Association of Healthcare Auxilians/Volunteers, stood up and talked about something she called “Once in a Blue Moon Award”.   The following wonderful story was written and told by Pat:

Back in September 2000 an older gentleman came into the Boulder Community Hospital Volunteer Services Office.  He sat in a chair and said he would like to volunteer.  He said he would do anything that needed done.  Then he started to softly cry.  His wife had just died and he knew he needed a reason to get out of the house.  He was 88 years old and lived with his son and daughter-in-law.  He didn’t want to be a burden and needed to be productive.

He became our “dispatch” mail service volunteer.  He volunteered Monday through Friday – rain or shine.  The only thing that would keep him from coming to volunteer was 1) an ice storm, 2) a trip to visit his other son in North Carolina or 3) a scheduled gambling expedition to Black Hawk.  Once, when his daughter-in-law was recuperating from surgery and his son suggested he stay in North Carolina for a bit longer, he called, arranged and paid for a temporary room at an assisted living facility because the people at the hospital “need me”.

He was a man of routine – he would come in every morning promptly at 8 a.m. – go to the cafeteria and have his breakfast – oatmeal or cream of wheat and toast.  Then he would pick up his mail cart and do a “round” visiting all the departments throughout the hospital.  This would take him until 9:30 a.m. when it was time for his break.  He would head back to the cafeteria for a cup of coffee.  15 minutes later he was ready for his second round.  Lunch was at noon.  Lunch was  30 minutes – no shorter – no longer length of time.  He always had an entourage surrounding him.  After lunch he would come to our office or another one to help with mailings or other projects.  At 3 p.m. he’d put on his coat and tip his hat and say “Goodbye ladies.  See you tomorrow!”

He knew everybody at our Broadway campus by name.  He knew who was a new employee, who was retiring; who was on vacation (and where); who was sick; who was getting married, having a new baby or grandchild… He knew because he truly cared about every person he met.  And everyone loved him in return.  He was everyone’s father or grandfather.

In 2008 he suffered a stroke.  Even though he was a Kaiser patient he got special permission to stay at BCH because we were his family.  When he was transferred to the Inpatient Rehabilitation Unit, he called down to our office – he was bored.  We would take work up to him.  The therapists even retrieved his mail cart to help him gain his strength and practice walking – much more effective than a walker!

2009 saw several more strokes.  It got harder and harder for him.  Then, on New Year’s Eve, 2009, he left us – on the night of a blue moon.  We mentioned at the time how appropriate it was for him to take his leave that night because a person as rare and special as he was only comes along once in a blue moon.

We held a memorial for him at the hospital for the employees who wouldn’t be able to attend his funeral.  One of the staff members suggested that a special award be named for him – the “Once in a Blue Moon” award.

We think it’s very appropriate that all four hospitals in Boulder County came together to honor two rare and special volunteers, Jan and Daryl and their four legged partners with this award. [End]

What a terrific and humbling honor this has been to receive this Blue Moon award: 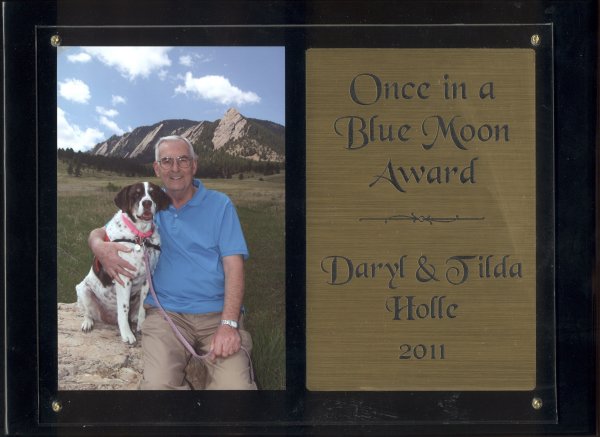 Once In A Blue Moon Award for Daryl & Tilda

In case you are wondering what a “Blue Moon” is and how often it occurs, here is a clipping of a newspaper article written in December 2009 just before the passing of Pat Dimond’s referenced Volunteer:

“THERE will be a blue moon on Thursday as New Year’s Eve revelers welcome in 2010 – the first time since 1990 that a blue moon has coincided with the end of the year.

A blue moon – the second full moon in a calendar month – happens only every 2½ years on average. This month, full moons occur on December 2 and December 31.

Astronomer David Reneke from Australasian Science magazine said it was rare for the event to happen on New Year’s Eve – another blue moon will not fall on the last day of the year until 2028.” 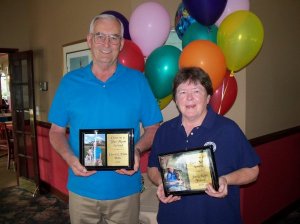 Jan Fincher and myself are both very dedicated to the operations and promotions of the therapy dog programs at all four hospitals.  We both enjoy our work very much.  One day, over a cup of coffee at Starbucks, Jan and I brainstormed an idea to start a website uniting all four hospital therapy dog programs that would explain the details of each program and allow a place for people wanting to enroll themselves and their dogs to sign up and be put on a waiting list for a future class.  I told Jan that I could do the website work if she would write the words and like magic the work began immediately.  We worked diligently with these four hospitals for approvals, procedures, applications and implementing their ideas and suggestions.  It was a tremendous joint undertaking by everyone.  Hence, http://www.therapydogsbouldercounty.com was born and it has really brought together the wonderful talents of all the hospitals and their Volunteer staff.

The honoree Jan Fincher is well known as a therapy dog classroom instructor.  She develops the curriculum, procedures, rules and most base regulations that all four hospitals use to operate their therapy dog programs.  She also teaches the classes for each hospital and is very well known for her dog behavioral skills.  Her dog Katie was a very popular therapy dog for many years working at Boulder Community Hospital and helped start the dog program at Longmont United Hospital.  Katie died a few months ago and everyone misses her a great deal.  She was a very talented visitation dog.  Jan’s great work is all voluntary as are all the volunteers working with these programs.  Jan spends countless hours and many gallons of gasoline supporting the hospital therapy dog programs in Boulder County.

Tilda and I have gone through the enrollment process for all four hospital therapy dog programs so we learned quickly how each program works and are constantly looking for ways to help the program to be even better than it was when we arrived.  Therapy Dogs perform a most important function within the Volunteer Services departments of each hospital.  Since these dogs do such close work with patients, visitors, visitor families and staff each day, it becomes paramount that each dog be tested for good behavior, be healthy, be well-mannered and that it passes all the class criteria and the individual hospital criteria all at the same time.   The human part of each team (called the “handler”) also has to go through specific training and orientation for each hospital.  A lot of effort goes into these programs to make sure everything is safe, scheduled and well organized.

The individual therapy dog organizations operating at the Boulder County hospitals are:

All therapy dogs working in hospitals are required to wear a dog vest and have a dog badge pinned to the vest with their picture.  Handlers must also wear a picture badge and the Volunteer uniform for that specific hospital.  The next time you see a dog team in any of the above hospitals, walk up to them and introduce yourself and thank them for their time and expense to make some lives just a bit more tolerable that day.  It will be appreciated and makes us all work even harder to keep the smiles on faces wherever we go.

Thank you Katie and Tilda!

Thanks to all who had a role in this recognition.  I am honored.