Since May 15th, Tilda has been displaying some puzzling physical symptoms. First, her left front leg swelled, then swelling went down within a couple days. A few days after that, the right front leg swelled so much that she couldn’t walk but on 3 legs. I took her to the Veterinarian and he was puzzled also as he could find no Bee/Wasp sting or any spider bites. Then next day, May 27th was the day of her photography portrait for the “Once In A Blue Moon” award which was taken at the base of the Flatirons in Boulder, CO. I had built a ramp with carpeting so I knew she could get in and out of the pickup truck without problems, but her leg was swollen so bad she had to hop to the photograph site which was about 100 feet away from the truck.

I lifted her up on the rock, sat down beside her and put her into a sit and then put my arm around her to lean her against me so she would not have to put any weight on the right leg. It worked and the super professional photographer, Donn Bruns, got the photo perfectly even though he had to nearly stand on his head while snapping his fingers to get Tilda to perk her ears. She was a real trooper that day and hopped all the way back to the truck and again hopped up the ramp into the truck and laid down in her bed.

When I lifted Tilda up that day to put her on the rock for the photo, I noticed what I thought was some extra swelling inside her leg up by the chest. Later, that swelling increased to the size of a baseball hanging off her side and chest. I took her back to the Vet again, not a clue. The next morning the swelling decreased again and was totally gone within 24 hours. This time there was a bump on the lower part of her leg after the swelling disappeared. How strange? I thought at the time it must have been an insect sting.

Mixed up in these events was some minor surgery done by the Vet to remove a small wart on top of her head as when she visited people in hospitals, they would constantly rub on the wart while petting her and sometimes it would get sore. The wart was removed on June 6th. When I arrived at the Vet’s office to pick up Tilda, the Vet said he found a bump on the back of her head that looked suspicious to him so he biopsied it for further testing. The lump/bump was about the size of a small marble. I never knew it was there and it was just a few days earlier that I had given her a bath and washed that area of her head. There was no bump there at that time.

In a couple more days, around June 9th, I was feeding Tilda and noticed more bumps sticking up on her right shoulder. Those were absolutely not there a couple days prior. I then asked Tilda to sit, lay down and roll over so I could examine her which she was very willing for me to do. I found lots of bumps on her skin which were not there when I last gave her a bath. Later that day, she came to me at my office desk and immediately 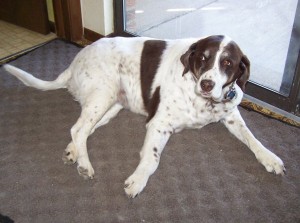 vomited without warning. Very Strange! That same day the Vet called and said the lab results came back on the biopsy he took from the bump behind the head. He said it tested POSITIVE for a Mast Cell Tumor and that I should immediately make an appointment with Colorado State University. They are renowned to be the best in the US for matters like this. I called CSU and got an appointment for June 20th at 9:30. I felt lucky I could get in to the oncology unit that quick. So now all we have to do is wait and then get to the appointment, so I thought.

On Saturday night, June 11th, she scratched one of the larger bumps off her shoulder during the night, or attempted to do that anyway. She came and woke me up from a deep sleep and I could tell by the look on her face something was wrong. I turned on the light and there was a lot of blood on her right side. The wound was still bleeding so I attended to her, cleaned her up and laid with her for a while until she fell asleep. The next morning when the sun came up, I called and made an appointment with the Emergency Pet Clinic at CSU as the wound looked nasty. They got us right in to take a look at her and quickly attend to the wound. We weren’t there for major exams and testing, that would be done on June 20th. As we walked into the facility, there was a large waiting room with 15 people or so, all with emergencies. I was headed for the front desk check-in clerk when Tilda yanked me off to the left and she started visiting with people in the waiting room going right down the row as if she was working at the hospital waiting rooms which she does so well. She visited with each and every person there, then we went to the check-in clerk to let them know Tilda had arrived. We the went to a quiet place in the waiting room, Tilda looked at me strangely and vomited on the floor right in front of me. Oh My! This was not normal and most concerning. One of the attendants brought some towels and we cleaned it all up and Tilda had her ears down as if to say “I’m sorry”.

Finally the Vets and assistants came and they examined Tilda in one of the exam rooms with me present. The Vet said clearly that the bumps indeed appear to be Mast Cell Tumors, but for today, the immediate task is to clean up her wound. He said the reason she scratched the bump is that they secret a toxin that itches like crazy, plus they secret chemicals that make her sick to her stomach. Yup, I can certainly agree with that diagnosis. So he stated that his goal this day was to fix her wound, then put a T-shirt on her to keep her from tearing open any more of her bumps. He also prescribed some meds to help with the upset stomach and to help with the itching hopefully.

I asked him what the next step was after today and he simply stated to come back on the 20th for the analysis with the oncology dept. They will do an MRI and other tests to determine the “stage” or the “grade” of advancement of the Mast Cell Tumor activity. Grade #1 is curable by 90% most times. Grade #2 has a curable rate of around 55%. Grade #3 is terminal and only a couple percent survive it as with this grade, it is usually found in the spleen, liver and bone marrow.

In order for me to pay attention to Tilda’s condition, I have been counting the bumps on her skin each evening. She seems to be very fond of the attention and lays very still through it all with her eyes wide open. She knows that I know and nothing more needs to be said about it. On Monday night, June 13, there were 32 bumps on her body. On Tuesday night, June 14, there were 39 bumps on her body. On Wednesday night, June 15, there were 45 bumps on her body and on June 16 there were 53 bumps on her body. These hard bumps ranges in size from the size of an eraser on a wood pencil to a small marble. All are very hard and almost cylindrical in shape. She has a very large one right on her left ear, one on each cheek of her face, many on her neck and legs, just about everywhere except on her tummy. However, on June 17th, she is limping on her right leg again. If this follows the same pattern as previous, her right leg will be swollen tomorrow. I have read on the internet that these Mast Cell Tumor and invade the Lymph Nodes. If that is the case, it may be an explanation of the leg swelling. I am thinking now all of this is connected to the Mast Cell Tumors including the vomiting, the horrible scratching and the leg swelling.

The good news is the vomiting has stopped so the pills seem to be working. She does still

try to scratch at the Tumors, but the T-Shirt is protecting the bumps pretty well. I took her in for a bath on June 14th and she loved that so much and got to visit with a lot of her friends at the dog wash. We also went visiting some other folks in public places and she was very sweet and loving. The morning after those visits, she strutted like you wouldn’t believe as if to say “Yes, I am back to work again doing what I love

best”. That visiting seemed to lift her attitude more than anything and she came back to her old self again. She has been full of good spirit and even did her daily bark to let me know the UPS man had arrived. She hasn’t done that for over a week, but for this day she is back for another try. That event brought tears to my eyes as she ran out to greet the delivery man to beg for her treat and then turned right around and sat up straight at the steps of his truck begging another treat from him while wearing her floppy T-shirt.

These are tough times for all of us that care about Tilda. None of us live forever and Tilda is already 13 years old. But, she loves her work of visiting people so much and even doing it 4 days per week didn’t phase her zest for it one bit. Hopefully, with all our hopes, good thoughts and prayers, Tilda can battle her way through this tragedy and get back to work very soon. She can always find people that need her attention. About all I can say is we are sure going to give it our best. We won’t know anything more from the Vets until after the appointment on June 20th so give a shoutout for Tilda in the most positive way you can. I will keep Tilda’s Friends updated as new information comes available.