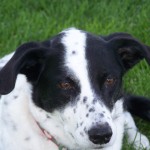 Sissy-Biskit, Donna and I made the pilgrimage to Laramie and Cheyenne, Wyoming on Saturday, August 4th, 2012. It was a couple days short of one year when Tilda, Donna and I made the trip on August 6th, 2011. That was the trip when Tilda really didn’t want to get back in the truck after laying in the grass in the city park in Laramie. The air was very cool in Laramie a year ago and Tilda was really enjoying the cool air on her bumpy skin. That trip with Tilda to Laramie was during the last 3 weeks of her life and she enjoyed it immensely. Her skin was always so hot from the Mast Cell tumors and when I would throw a cold wet towel over her back a big smile would arrive on her face. She especially liked the towel at the city park that day. 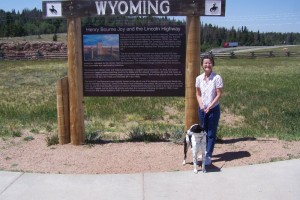 I am quite sure that Tilda made the trip last weekend with us. She hitched a ride with Sissy as she always does, yet she allows little Sissy to be herself. It is a very wonderful thing to observe and I see the phenomenon now and then almost every day. Tilda is not near ready to give up on any of us yet, but we are not complaining and cherish every moment. That attitude might sound a bit strange for some, but very easy to understand when one gets to experience it first hand as we have. All dogs have unique traits that you witness day in and day out and know that only they can do these things. It is their personality and their demeanor. But when you see those personal and private traits being re-enacted by another dog in the same precise manner without being trained or coaxed, it simply takes your breath away. I used to think I was probably dream wishing or fantasizing, but soon learned that I wasn’t. It is real and I love it. 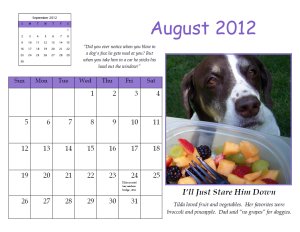 The date of Friday, August 24th marks ONE YEAR since Tilda passed. For those of you that have Tilda’s calendar, you will see the date is identified. The August 2012 calendar picture of Tilda brings back lots of great memories with her. She just love fruits and veggies and her favorites were broccoli and pineapple. She had this wonderful stare and if she could hold it long enough, her thoughts would finally get my attention as they penetrated. That dog knew how to “reach into a person” and get her point across and guess that is why she was so remarkable as a therapy dog.

Little Sissy-Biskit is doing great as a therapy dog. She is now working all 4 Boulder County 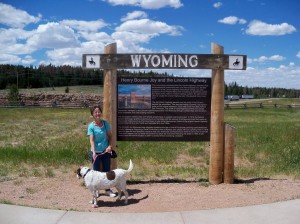 hospitals and she also stops by a new assisted living center for Alzheimer’s patients in south Longmont every Friday afternoon. I already have a whole backlog of great stories to tell about Sissy’s visits, but there simply isn’t any time to write about them these days. Normally, Sissy is a very quick visiting dog. She doesn’t like dog treats very much unless they are homemade and contain peanut butter (well, excuse me…….such a picky little girl). But I found out by accident several months ago that she loves Cheerios so I carry a waist pouch on my side when we are visiting and I put some in the patients hands so they can feed Cheerios to Sissy-Biskit. She has a very soft touch with her mouth and the kids just love it and giggle delightfully until I have to laugh myself. For the small children, Sissy learned from Tilda that a doggie has to get down on the floor and lay on their side so the kids can pet the dogs tummy and rub her side. Sissy loves it and I can tell her favorite child is a small girl around 3 to 5 years of age………..exactly like Tilda. 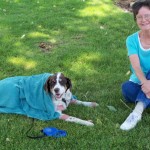 Tilda under the tree at Laramie City Park August 6, 2011 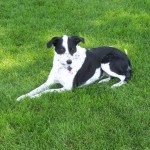 Sissy at the Laramie City Park in the same spot under the tree, August 4, 2012.

Sissy isn’t as tolerant as Tilda was when visiting……..she is always happy and loves to meet, paws up on the knee or on the bed (very gentle and sweet) and then she goes into this “where are my Cheerios?” thing and after eating the snack it’s on to the next person as if to say “thank you very much and have a nice day, but I have other people to see now”. The Border Collie friskiness in Sissy really shines when we visit the hospitals. She gets so excited and is memorizing the route. She already knows what corner to turn and which direction. Once in a while she stops, looks left, looks right, looks back………….as if she is lost. Then she looks at me and I will tell her “this way” while I tug the leash in a certain direction and she is off and trotting again. It is pretty darn sweet to watch. 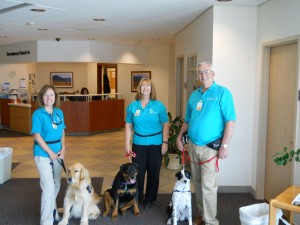 On another subject, recently a small group of therapy dog teams at one of the hospitals started an enjoyable adventure called “The Dog Posse”. Normally teams visit one team at a time during a certain scheduled time at the hospital. However, several of the experienced teams got together and accidentally stumbled across the idea of doing a “flash mob therapy dog visit” to the hospital on a weekend day when no other teams were scheduled. Sissy just loves doing this event as do the other good dogs. We still observe all the rules and only visit one dog per patient at one time, but the patients and staff get to see 3 or 4 dogs…….one right after the other which is a lot of fun for everyone including the teams doing it. This certainly is the next level of therapy dog visiting as it requires extreme concentration on the part of the dog handlers while at the same time participating in the excitement that this concept brings about.

Sissy tries so hard. Now and then she has some quiet moments with a person and it is very eye catching to watch. She has learned that she can crawl up on the bed or on a sofa and lay/sit beside someone and just hang out. She is not allowed to do that at home so it is amazing how quickly these dogs learn what is permissible away from home. Sissy’s best visits have been on a sofa or bed curled up beside someone that needs a bit of special loving that day. Last Friday, there was an elderly lady in a wheel chair in her room who wouldn’t go outside the room and was being anti-social with a very negative attitude. The

Sissy hanging out with some Tilda Friends jabbering about old times.

attendant pushed the wheel chair along side the bed and I asked Sissy to get up on the bed beside the wheel chair…….and she did. Sissy had her front legs/paws hanging over the side of the bed so the lady started petting Sissy’s legs. The petting stroke was very much a repeated rhythm, stroke after stroke and all of a sudden I could see the lady wanted to say something as her lips were trying to form a word. I asked the lady if Sissy had soft legs and she immediately replied “Yes, very soft”. The lady then asked me how old Sissy was……..and the conversations began. Within a couple minutes the lady was talking NON-STOP and suddenly became so excited about her day. She asked me lots of questions and soon was telling me all about her dogs of the past. Then the lady talked directly to Sissy telling her all about the dogs she has had and Sissy was motionless just looking at the lady’s eyes and listening. The most touching part was when the lady told Sissy “my favorite dog is named Lucy and I can’t find her. Some people tell me she died, others tell me she is still alive…..but I can’t find her. Sissy, if you see Lucy will you please tell her where I am so she can find me?” At this point, as you might well imagine, the attendant that was in the room with me totally lost it and had to walk out for some Kleenex. I was concentrating on Sissy to make sure she was okay, but my eyes were getting blurred with water also. I tried to fight it back as Sissy is my concern and she trusts me to look out for her. Sissy was fine and this conversation went on for around 30 minutes and the lady never quite stroking Sissy’s paw/leg. That is the longest visit Sissy has ever done and she still was in no hurry to get up and leave. So something was going on there and it was all GOOD for sure. I found out later this lady is 97 years old and is a native Coloradoan.

The attendant came back in the room and asked the lady if she wanted to join some other people out in the community area and watch TV and play some games. The lady responded “yes, that would be fun” so away they went. I got up off the bed and so did Sissy. Sissy looked at me as if to say “did I do okay, dad?”. I spoke out loud telling Sissy that she did great!

Thank you, Sissy! Thank you, Tilda! Wow! I love these dogs! 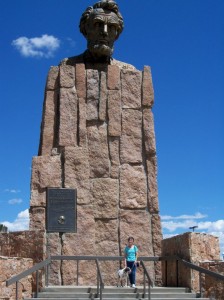