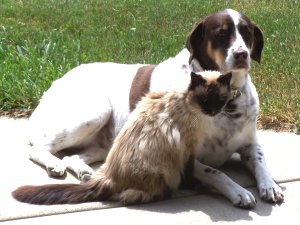 Tilda and I were visiting a facility a few months ago where people from a nursing home were all gathered in a community room listening to beautiful piano music being played by an individual on a piano.  As we walked by this room, it grabbed our attention as the music was spectacular and all around the area were elderly people in their wheel chairs lined all around the room who were attentively listening to the wonderful songs of the past being played.

As we were standing nearby, I noticed a lady seated on a sofa chair in the room who was trying to get my attention so Tilda and I walked over to her and bent down so she could whisper to me that I should feel free to walk Tilda around to all the guests as they would really enjoy meeting her.  I told the lady we would do that immediately.  So Tilda started cuddling her way into each wheel chair meeting this person and that person, carefully making her way in between the obstacles.  It was lots of fun for her and every stop was greeted with a very big smile of approval.  Tilda was very happy waving her white tall as if it were a flag blowing in the wind.

There was one elderly lady way in back of the pack who was also sitting in her wheel chair.  This lady was motioning to me as we came closer to her that she wanted us to come see her so I steered Tilda in that direction.  After Tilda pulled up to her chair so the lady could pet with both hands, I could tell this lady dearly loved dogs.  I bent down so my face was at the lady’s level and remarked “you love dogs, don’t you?” and she shook her head yes.  She was very lovingly stroking Tilda’s head and messing with her ears which went on for quite some time.  Every now and then the lady would look and me and smile as if she had something she wanted to say but was hesitating.  I finally asked her if she ever had a dog of her own and she said “yes, many years ago”.  She went on to say that not having a dog now is one of the things she misses most.  She then said “and I miss my little Frankie the most.  Frankie was……” and then she quickly stopped.  I leaned over and asked her “What about Frankie, was he your dog?”  She shook her head no and just kept looking at me several times as if she wanted to tell me something but was holding back.

All those minutes went by and she continued to fondle Tilda with loving eyes and soft pets.  I had straightened my back by standing up again as it was beginning to ache a bit from bending over.  The lady then looked up at me and used her index finger to motion for me to bend down to her level again, so I did.  She whispered in my ear “Can you keep a secret?”  I told her that it depends on what the secret is.  She replied “well, you can tell my story but please don’t use my name or tell anyone where I live or I might get into trouble”.  Again, I repeated that it depends upon what the story is but I would be happy to listen if she felt like it.

The lady immediately started telling me that when she lived “at home” there were some nice neighbors next door who both worked during the day and weren’t home.  They had a small dog which she said was a Boston Terrier which during the warm weather days, they left in the back yard which was fenced in.  She said “I used to go play with the dog through the fence during the day as it was so sweet and once in a while I would give it a small dog treat.  One day I told the neighbor lady that I really liked their dog and that if they wanted me to take care of the dog during the day while they were away, I would love to do that for no charge as I love dogs and would appreciate the companionship.  The lady declined my offer and said that the dog was very active and might get in the way causing me to stumble and hurt myself and it was best if the dog stayed at home.  I was sad but said nothing and respected her decision.”

The lady then told me she quit going to the fence and quit giving the dog treats as she didn’t want to cause trouble.  She said the dog would whine now and then wanting her to come over but after a while it stopped.  She went on to say “Then one day, I was sitting on the step of my back porch getting some fresh air and I heard something jump up on the porch and here it was the neighbor’s dog which came over and laid down beside me.  I petted the dog a few times and then he crawled in my lap and almost went to sleep while I was petting him.  After a while, I put the dog on the porch and went into the house to get him a drink of water and a treat.  When I came back outside he was gone and as I looked up into the neighbor’s back yard, there was the dog again, back home and safe.”

I told the lady that obviously this dog really wanted to spend time with you.  She replied “Yes, I know he did.  In fact, he would come over every day that I sat outside for a few minutes and I finally discovered a hole under the wire fence that he had dug which he passed through each day to come see me for a few minutes.  He always came over for a drink of water and a treat and then we spent some quality time.  I named him Frankie as I didn’t know the dogs name and he seemed to like that name just fine.  This went on for months during the warm time of the year and then in the wintertime, he was locked in the garage so I never got to see him.”  I asked her why she didn’t want me to tell anyone her secret and she answered “because I don’t want to get Frankie in trouble as we loved each other very much.  He was very special to me.”  Later in the conversation, she did give me permission to document the story as long as I didn’t reveal her name or address which I didn’t know anyway.  The lady ended our conversation by telling me “I really, really miss my Frankie and nothing would be better than to spend a couple hours with Frankie.”  I asked her what year that happened and she thought it was around 1995 or somewhere in there.  We said our goodbye’s to the lady and she had this major big smile on her face that I will never forget.

Now whether this was a true story or simply a fantasy story, it didn’t matter to me.  The moral of the story is this lady had a vision of what might be only that or could have been a very special time in her life with a dog named Frankie.  Frankie may have been a real dog or it may have been her imagination, but to her it all was as real as if it were yesterday in her back yard.

Dogs continue to supply us with fond memories even after they are long gone.  This lady was clear proof of that fact for whatever reason.  Frankie had to have been a very special dog that saw a special need and the beauty part of it all is that the lady saw the same needs in Frankie.  Life is good when there’s a dog involved.