Tilda’s Incident No. 3 in the Intensive Care Unit Waiting Room 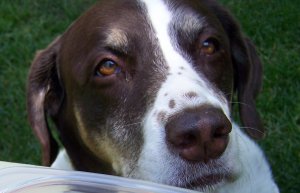 Just when I thought it wouldn’t be possible for Tilda to have another interesting connection in the same hospital ICU waiting room for a good long time, it happened right before my eyes. I would think that the odds are so against this happening so many times in one room of the same hospital it had me re-examining exactly what I saw on Friday, February 18, 2011. After this occurrence that day, I went to a quiet area to sit down and contemplate what I just saw Tilda do. It was so dramatic to me as the previous incident was only the week before, exactly 7 days prior.

Now that I have had some time to think through each second as they occurred in the room that day, I know for a fact that what I saw was real and the energy around Tilda at that moment was so strong you could almost feel it in the air and so could the occupants of the room. I have been discussing this phenomenon with some other very knowledgeable dog people and I think we may have a clue as to what is going on with Tilda inside this room which I will explain in a moment. First I want to tell this beautiful story;

We were working our normal once per week shift at the facility and all in all it was a normal day with lots of visits to all kinds of people bringing many smiles to lots of faces. Tilda was in a great mood and very attentive to nearly everyone that had the time for her. As we approached the doorway to the ICU waiting room, I could see there were 4 people seated in the chairs along one wall and a Doctor was seated in front of them discussing some things with them. I pulled Tilda back immediately as those appeared to be family/Doctor discussions and not proper for us to interrupt. We wandered on to the next stop on our rounds and in about 20 minutes we came by the ICU waiting room again. This time there was nobody in the room, it was empty.

On the third round we stopped at the room again and the same family was there and appeared to be just hanging out spending time. As we entered the room I saw what looked to be a man, a woman and two teenage children. I assumed this indeed was probably a family. As I walked in with Tilda, I announced ourselves as the man looked at us and smiled. He acknowledged that he would love to meet Tilda so we headed in that direction. However, he was not the easiest person for Tilda to get to as this time the family was sitting in a half circle with a small coffee table in front of them and the man was in the middle of the group. All 4 people had there eyes on Tilda when we were still around 15 feet away from them, but suddenly Tilda’s leash tightened up and as I looked down at her, her ears were perked and she had already zeroed in on the man. She headed right towards him with that familiar driven intent and went behind the coffee table, stepped over the teenagers feet and pulled right up to the man and locked herself into a strong and attentive “sit”. I was off to the side over by the woman, holding the leash, and knew right away that something is going on here. Tilda’s eyes were locked on the man’s eyes and her ears still in perked position. The man leaned over, took both hands and begin to massage her ears and neck on both sides in a very loving manner with Tilda still sitting at full attention between his legs. Normally when someone does this to Tilda, she will lower her head and attempt to rub on them and love them up a bit, but at this moment Tilda didn’t move from her eye-lock position and just kept staring at the man’s eyes.

At that very moment, the Doctor came back in, moved the coffee table and pulled up a chair in front of the family and began discussing things. I softly said “Tilda, we have to go now” (while the man was still massaging Tilda aggressively with both hands. I gently tugged on the leash as that is the signal to Tilda that it’s time to move on. Tilda would not budge from her position or look at me at all. The man looked up at me and whispered in a low voice “Please let her stay” so I just slightly turned my body away from the group but kept my eye on Tilda for her safety while the Doctor continued to speak. Then suddenly, the conversation went towards a very unhappy prognosis concerning a family member and I just kept saying to myself “I shouldn’t be here, I shouldn’t be here” and I then looked at Tilda and she was still in her intent staring position, nothing had changed. I tried to tune out the conversation but that didn’t work well either. Suddenly, the man lowered his head and began weeping with his hands motionless yet still grasping Tilda’s head in an affectionate manner. Tilda just kept staring at him. The woman looked at my face and saw my concern and she just motioned to me that it was okay as by now I think she saw this special moment also. By this time the gentleman’s sobbing turned into crying and at that very moment, Tilda took her right leg and raised it up very slowly and lovingly and put her paw in the gentleman’s lap while staring at his face. His hands were still around her head. He didn’t respond so she lowered her leg and repeated the maneuver again and this time he saw the paw and said “Oh Tilda, you are so special”. The Doctor was done talking but he didn’t leave and watched also. The man leaned way over and hugged and kissed Tilda and she began licking his face, then put her paw back up on his lap again in a reassuring manner, all while still staring him in the eyes. The man was smiling and wiping away his tears and I tugged on the leash and quietly told Tilda “it’s time to go, Tilda” and she immediately turned and was ready to leave. Tilda took about 4 or 5 steps and then turned her head back to look at the man again with her tail wagging and held high. The woman looked at me and put both her hands over her mouth in a gesture indicating she was overwhelmed by what was going on here. Just at that moment, the man looked at me and said “Thank you, sir and thank you, Tilda, for being here”.

As you might imagine, the goosebumps on my arms were now almost welts and again I had chills running every which way. In a broken voice I politely thanked the group and we left the room with the Doctor following us out the door. Just as the Doctor and us were about to split up and go our separate ways, he said “thank you” which caused me to turn around and say “you’re very welcome and thank you for what you do”.

That is the end of the wonderful story. An interesting afterthought for me in thinking back through these moments was that Tilda never paid any attention to anyone else in that room (the other 3 family members). She totally ignored them which is not her normal style at all. She zeroed in on the man as if she knew he would be the one needing her assistance and reassuring attention and she was very dedicated to that effort. Whatever mystical thing occurs during these times (and I call it that as I don’t know what else to name it), it appears to me that Tilda knows what she is doing with her soul-searching stare being almost spiritual in a certain way. But, the question is WHY is this happening in this room so often? That question puzzles me immensely and the only reasons I can come up with (us humans have to understand everything, you know) is the following:

The room is dimly lit and is in an older facility. That room has been there for a very long time, must be decades now. Being a room where families gather in times of caring support, stress, happiness, quite often sadness and many times an area of Doctor visits bearing not-so-good news as it was in this case. What I am trying to say is this room has witnessed thousands, if not thousands many times over, of very emotional conversations with many of them causing people to re-examine their own life reaching out for help with the pain or joy, whichever fits the circumstance. A possible reason Tilda does this so often in this room is that she senses this aura when entering that room and is on alert and immediately searching for whatever it is she keys in on. It is also important to know that no food or treats are passed to Tilda before, during or after visits to this room. Tilda is doing this from her own initiative and that is indeed what is “mystical” about it. I am such a lucky fellow to witness these special moments. Thank you, Tilda! I really am trying to understand.