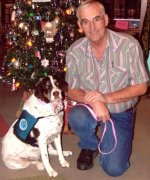 During early December, 2010, we were signing in about to begin Tilda’s visitation route at a local hospital.  While doing that, the volunteer at the front desk (who knows Tilda well) informed me there was a very large group of people in the ICU waiting room today and they were having a very sad day with a family member and if I could find an opportune time to work our way in, it might be heaven sent for them.  I assured her I would try if at all possible without being intrusive.

On our rounds, I stopped by the ICU waiting room 3 times over the next hour.  The first two times looked to me as though it was not good for me to enter.   On the 3rd stop, the cries of sadness had slowed somewhat so I let Tilda lead the way into the room as I followed.  I announced that this was Tilda, a therapy dog and that was all I could get out as Tilda immediately zeroed in on what I am guessing was the family matriarch (I would guess it was Grandma) and Tilda quickly went to a sit position on her own with ears fully perked, began scooting and wiggling  her way to the lap and into the heart of this sobbing lady.  The entire room was full of adults, no children, with no empty seats (probably around 20 people) and most were sobbing quietly.   Tilda focused on Grandma and had her crying joyful tears within 30 seconds as Tilda lovingly put her head onto the lady’s lap while looking up and gazing right into the lady’s eyes with her tail wagging with insistence (it was almost like Tilda was telling her to “stop for a moment and follow me”).  It wasn’t but a few seconds before the entire room was echoing with oooh’s and aaaah’s.  Tilda didn’t show any interest in anyone else, just Grandma.  The tension in the room relaxed, I could just feel it, so I finally spoke to get Tilda’s attention and asked her out loud if she cared to do a couple tricks for these fine people and she immediately turned around towards me and sat in a locked position and did her “give me 10” trick.  Then she responded quickly to “shake” (which she rarely does).  I thought to myself “wow, this is interesting.  Maybe I’ll just keep going and see if she will do some other things we practice now and then that never go very well.  Tilda is not into tricks much.  She immediately responded to “down” and laid flat on the floor with her head resting on her paws.  I then gave her the hand signal and said “over” and she immediately rolled over on her back in her pink belly position, just as precious as it gets.  By that time the room was in laughter and applauding while at the same time crying “happy tears” with the women mopping their eyes with tissues.   She did all those tricks perfectly using every effort she could to please which has never happened before, EVER.   The room suddenly became a different place and much of the tense feelings had disappeared momentarily.   I could feel that everyone had just one moment to release a bit and enjoy but yet I felt we needed to be respectful of their situation so we thanked the people and walked out.  On the way out, there must have been a dozen “thank you, Tilda’s”.  I won’t soon forget that one.  It is what this program is all about and what keeps me making the drive and taking the time.

For the short time I have been working with Tilda at this endeavor, I have already learned that these dogs are very, very special once they understand what it is they are supposed to be doing.  The amazing thing is that therapy dogs like Tilda do “get it”.  Most times they are very low key and just want to see their people friends at the hospital.  All they want is a warm massage rub, a loving pet or two, maybe a treat if Daddy allows.  But once in a while,  a “happening” comes about and it is INSTANT and it all happens so fast that it really jerks at the heart strings.   The key to the experience is to just “allow it to happen” and be ready for it at every potential visit.  I really have to concentrate and watch her moves carefully as she gives me the clues when its about to happen.  The “drive” that Tilda displays during these events is very purposeful and most intentional and there is nothing casual about it at all.  That is my cue to “shut up and watch carefully” as something very special is taking place.  That is the feeling I get each time I see one of these events.  In this case, Grandma was way across the room, nearly the farthest person from the door, but Tilda went straight for her and was staring her down with intent and kept pulling/scooting towards the lady.  The lady had her head down with her face in her hands so something went on there that cut through all that emotion and pulled it back towards the center.  I don’t know what that is, but I think the volunteer at the front desk was right;  it may have been heaven sent for those people on that particular day and moment for those folks.   I also know that one cannot “train” a dog to do this, they pick this up on their own if its in their nature to do so.

I get teary-eyed every time I think about that day.  It would have been interesting to know all of the background behind those people that day, but then again, this was pretty darn special without knowing a thing except for what one saw in the room and how the tensions changed with Tilda at work.   That’s her job and I see my job is to be there in her support and allow her to do it.  I have had several of these now and when I witness it, I feel I am the luckiest man in the world.  Life just doesn’t get any better than these times.