Tilda at the Oatmeal Festival 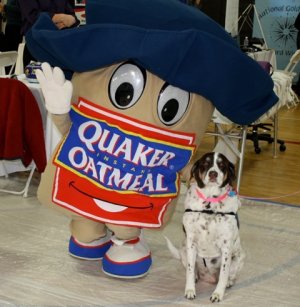 Tilda was invited by the Boulder Community Hospital Therapy Dog group, called the Canine Corps, to attend and work the Lafayette Oatmeal Festival on January 8, 2011.  We arrived early at 7:15 am and after we received our instructions, we were ready to go to work.  Our job was to make the visitors to the large hospital trade fair feel at home and welcome.  We operated 2 dogs on each 2 hour shift for a total 3 shifts (6 dogs total).  Tilda and I spoke for the 8 to 10 am shift and the time just flew by.    The Quaker Instant Oatmeal fellow came by and wanted to pose with Tilda.  The costume didn’t bother Tilda at all.  She just sort of looked up at him as if to say “Oh, it’s just one of those Quaker Instant Oatmeal clowns, not a problem”.    We posed for more pictures with some other folks and their cameras and then we finally decided that we had work to do and Tilda was ready for the challenge. 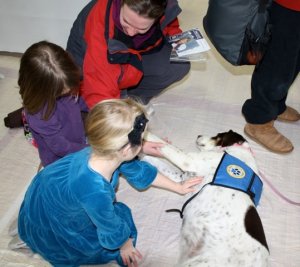 Tilda in Her Children Position

One part of the trade fair was a place where kids could get fingerprinted, photographed and have ID’s made up (with parents permission of course).  This is a great idea and Tilda visited with the kids while they were doing their tasks which helped them feel a bit less intimidated and it sort of spread out their comfort zone a bit.  On a good day of visiting, if Tilda likes someone and is comfortable with them, she quickly responds to my command of “sit”, “down” and “over”.   She does that all especially well with children and they love it as it gets Tilda down to something below their level and it is not so intimidating for them.    Of course the children then begin to rub her belly and play with her legs and she loves that attention and acts as if it is her duty to give them this pleasure.   Her big brown eyes are wide open during the whole process.  Another interesting trait Tilda has is that if the adult will kneel down also, Tilda will put one of her front paws firmly on the adult as if to brace herself and yet letting the adult know that what is going on is all okay.  She is just starting to accomplish that effort in the above photo. 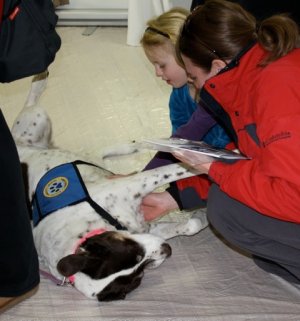 You can now see in the photo on the left, how Tilda managed to complete her braced leg to the adult.  She will stay like this for some time (sometimes 30 seconds, sometimes several minutes – I saw her go over 20 minutes once in the lobby of Longmont Hospital) and then she will use leverage from that braced front leg to roll her rear legs and tummy another 45 degrees so we have what I call “Pink Side Up” which is when her pink tummy is exposed and she throws her hind leg in an open stance.  The Pink Side Up command is a new command I am trying to teach Tilda.  We don’t quite have that one accomplished yet, but she is doing it about one time out of 5 now, so progress is being made.   Even if I do finally have results with teaching Tilda this new command, I doubt she will do it on command every time even though she knows what I want.  She has to feel comfortable with the situation surrounding her as she is making herself vunerable and it just isn’t going to happen if it’s not right.  You can see how much she was loving these two little girls and their mom also.  Keep in mind this is the first time she has ever seen these people. 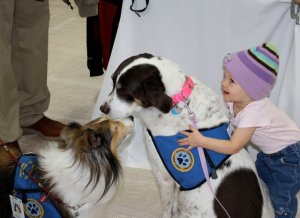 A good Therapy Dog has to be ready for nearly anything that could come about.  This photo shows a great test for Tilda.  I saw some things about to take place that could be a very stressful situation about to happen.  There was a delightful little girl behind Tilda who was not afraid of big dogs at all plus there was another small dog in front of Tilda wanting attention of Tilda.  In addition, there were lots of people standing close around so I put Tilda in a “tight sit” (that is to firmly tell her to sit with a lower voice, she knows the difference).  The father of the little girl told his daughter to hug the doggy and the small dog came in closer to see what was going on when this picture was taken.  Tilda held strong and never flinched.  As you can see in the photo, Tilda was more concerned about what the dog was going to do to her rather than what the child was going to do. 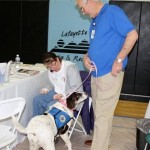 I need a break, Dad!

The rest of the two hours there was lots of fun also.  We walked around and saw all the displays of modern medical technology and ideas.  We even got to see a very large robot surgery machine that was operated by a surgeon which gave him super precision skills.  Tilda visited at least a couple hundred people that day and after her two hour shift, she was exhausted.  It was a fun day for the both of us and we once again learned how well dogs can relate with people if people will just give them the chance.

We love doing events like this as it is a learning experience for sure.   It is amazing to me how these dogs get so involved in their work.  Some people look at these dogs and think it is just a dog that loves pets and treats.   When I watch most of these dogs, I see a whole bunch more as the good dogs could get away with doing a whole lot less and still get the same reward, but they don’t.  They give it their all and try to make a connection statement if they can and are allowed to do such (which depends on lots of things going back and forth between human and dog).  It is very interesting and challenging work without a doubt.