Last Monday, July 11th, Tilda and I reported to the CSU facility for her normal weekly examination and blood test. Tilda was doing great previously until late Sunday afternoon, July 10th, through the night and early morning, July 11th. Something was changing for Tilda as she was acting disoriented and lethargic. When asked if she wanted to go outside, she acted like she didn’t know where the door was and kept looking around for it. Sunday night she had a miserable night with heavy and fast breathing acting as if she were toxic or very stressed. I was glad the weekly appointment was the next day so I could talk with the new doctor.

Upon arrival at CSU, they took Tilda to a back room for examination. Within 10 minutes they brought her out again, gave me a exit certificate stating the Clinical Trial for using “Palladia” drug had been canceled. The doctor thanked us for participating and said our original Oncology doctor would be out to see us shortly. I stood there in shock……absolute shock! Dr. Rachel Venable, our original cancer doctor came out within a few minutes and took us back to a small conference room. On the way to the room I asked “What just happened here, I am confused, to say the least?” The doctor explained that the Clinical Trials Tilda was in had been canceled as the Palladia drug was failing which was allowing the Mast Cell cancer to progress. I asked the doctor “now what?”. She said we could work together to design a maintenance program to keep Tilda comfortable and do the best we can. 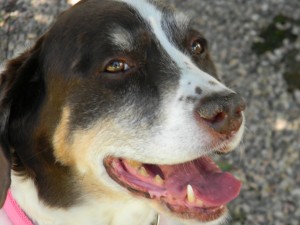 Happy Tilda Doing the Best She Can

I then asked the doctor about Tilda’s mid-section which appeared to be swelling or getting larger. She asked when I first noticed that problem and I told her about a week ago. She said for us to just wait until they get the blood test results back from today and then she would call me that evening. She called around 5pm and she stated the the red and white blood cell counts looked okay, but the counts for the liver had gone “ballistic” and were way out of the normal levels. She said “I think Tilda is having some troubles with her liver and she may be toxic and explains why she is disoriented sometimes. She went on to say “Liver blood counts like these are seen just before the liver shuts down completely”. She said that she needed to see Tilda the next day as early as possible to start some test work as the liver may be enlarging or abscessed. We made an appointment for 9:30 am the following day, July 12th. I ask doctor if I should continue the Palladia as I just received a new prescription and she replied “stop the Palladia immediately”. “Do not give any more Palladia to Tilda”. I thought to myself “uh oh”. Before I got off the phone, I asked the doctor why her blood work was clear the Monday before and she was puzzled also. The week before a Clinical Trial doctor had given me the report that her blood was normal and the tumors had stayed the same or shrank some. I was positive the tumors were not under control at all as the numbers and sizes of new tumors continue out of control. I expected to see this same doctor this week, but I was told she had been rotated out of the Trial and was working elsewhere. There are lots more details to this which I will hold for another time. 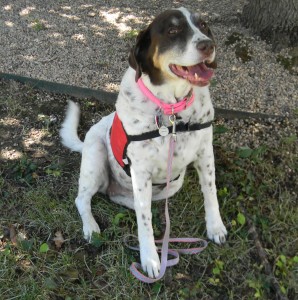 On Tuesday, Dr. Veneble worked on Tilda with another scan of her liver and organs. Upon a complete examination, she reported the good news that Tilda’s liver was not any larger than it was 3 weeks previous………which is good news. So she is suspecting some liver damage which is causing the abnormal blood test. She is putting Tilda on some special enzyme therapy to help repair the liver and after a tremendous amount of discussions of pro’s and con’s to all sorts of ideas, we decided to go for the “Vinblastine” Chemo therapy treatment which is an intravenous liquid treatment once per week for 4 weeks, then very 2 weeks for 4 more times. Vinblastine has liver healing properties and is about the only method that doesn’t carry with it some liver side effects. Tilda is too far advanced to stop the disease progression, but it may make her a bit more comfortable during this time.