Tilda Loving a Friend and Visa-Versa

On Tuesday, July 5th, Tilda received her weekly examination under the schedules set up for her participation in the CSU Clinical Trials. My personal observations this last week is that Tilda is doing very well overall except some days she has trouble with higher body temperatures and fast breathing (panting) on the days she receives the Prednisone medication. She seems to struggle a bit on those days, but the doctors assure me it is normal and that we should not consider lowering the dose of Prednisone at this time. The Prednisone is an important part of this overall treatment even though it appears to be the most aggressive part of the treatment.

CSU has rotated its Residency Vets again so Tilda now has a new doctor by the name of Dr. Kelly Carlsten, DVM. Dr. Carlsten examined Tilda on Tuesday and reported to me that of the original bumps that were recorded for size and shape, most all of them have not grown any larger and some of them have shrunk in size. This is good news according to Dr. Carlsten. What I see on Tilda is lots of new bumps since those original bumps were measured and recorded and they are growing in size at a rapid rate but not part of the tracking process for this Clinical Trial. I am not sure if one scenario has anything to do with the other so for now we just keep a close eye on things. Dr. Carlsten had no comment on the newer bumps as this was her first exam of Tilda and has no reference. Only the bumps located and identified are being tracked (documented) for this study. Dr. Carlsten told me they took a blood sample again from Tilda and she would call me later in the day with the findings of that report. 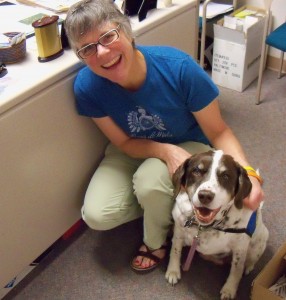 Around 7 pm on the same day, Dr. Carlsten did call and apologized for calling so late and said she had great news as to why the late call. Tilda’s bloodwork was NORMAL for the first time since Tilda has been going to CSU. No abnormalities were found in her bloodwork. Dr. Carlsten said this was some astonishing news for a dog in Tilda’s condition and no one quite understands this yet. She said the call was so late as they did a retest to make sure the test was accurate and did some tracking to make sure it was indeed Tilda’s sample of blood. She said everything checked out and they are sure that Tilda’s bloodwork is normal again for whatever reason. She also stated that this is great news and no normally what they would expect to see at this stage of Tilda’s conditions. Dr. Carlsten said that next week’s exam will give us a better view if this is a trend or a fluke so for now, don’t change anything.

I told Dr. Carlsten that Tilda’s attitude and demeanor has been excellent except for when she is given the prednisone and we are dealing with that through frequent cold water baths of the garden hose outdoors and then back inside the house to be pampered with more Air Conditioning to keep her cool. She said that is excellent and keep making that effort. She commented that whatever we are doing appears to be a step in the right direction.

The brief hospital staff visits we did last Thursday and Friday really helped give Tilda some spunk again. She really enjoyed and it seemed to put that smile back on her face again. In addition, I know lots of Tilda’s friends have been sending their hopeful thoughts and prayers to Tilda and I have read her every one of the emails, cards and letters she has received. Somehow I suspect she knows there are a lot of people pulling for her and if she had her way, she would rather just get back to work. But for now, we’ll keep her calm, cool and enjoying life as best she can. Thanks again for what all of Tilda’s Friends are doing.