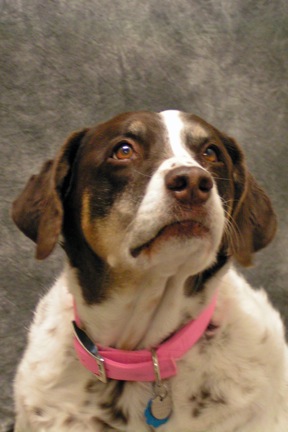 Little did Daryl Holle know what lay ahead when he and Tilda, a female German Shorthair Pointer/Bloodhound mix, adopted each other at the Longmont Humane Society seven years ago. Tilda’s ability to search for soulful connections with those who most need it makes her unique among her fellow canines. When Daryl noticed this special gift several years ago, he took the steps to get her enrolled in the Pet Therapy program (TAILS) at Longmont United Hospital. Tilda has had such success as a therapy dog that she now works two days per week at LUH, plus one day per week each at three other Boulder County Hospitals.

One of Daryl and Tilda’s goals is to put a smile on the face of patients, family, staff and visitors to the hospital, whether it is during an official visit or simply passing by.  Daryl carries a clicker-counter and counts each smile he sees as people gaze at Tilda. She is averaging over 550 smiles per week!

Tilda has had a dozen or so very intense connections with people. Daryl has learned to recognize the body language prior to these events and does not interrupt that process, because Tilda handles it beautifully. One day, the two of them were getting on the elevator with four ladies, including one with an obvious physical affliction and other special needs. The woman’s arms were shaking uncontrollably and her shaking head was tilted upwards with eyes a bit unsteady. As the doors closed, Tilda immediately turned her body towards the woman, who didn’t see her, but Tilda latched onto her intently with ears perked and serious intensity. Daryl noticed that her little tail was wagging very fast on the floor. When that happens, he knows that Tilda is about to do something wonderful, if she is not interrupted. One of the other ladies happened to glance down at Tilda, just as she took a small “scoot” towards the afflicted woman. The rest of the women looked at Daryl with puzzled looks, so he quickly put his finger in front of his lips to signal them not to say a
word. Tilda took several more scoots towards the woman, whose hands were moving frenetically, but she managed to lick one hand as it passed by her head. The lick caught the attention of the woman as she guided her head down to see Tilda. Tilda then raised both of her front feet and sat up on her hind legs trying to get the woman’s full attention by propelling her paws at her. Finally, when the woman saw Tilda, she just sank down on her knees in front of her, gave her a big hug, and they both ended up on the floor. As the elevator arrived at the 5th floor, Daryl looked up at the other ladies’ faces. They all had their hands covering their mouths in amazement and tears streaming down their faces.

This is only one example of the healing moments Tilda has shared with the people she connects with. Other compelling stories can be found in her blog on her website at http://www.tildadog.com.