Doc & Tilda and Sissy-Biskit Too!

Doing therapy dog work is always rewarding, but it was Tilda Dog who taught me to watch for the special moments and cherish them as one of the most precious treasures of life. I have a great example to share with Tilda’s Friends in this writing which demonstrates the powerful connection that therapy dogs can bring about. It is so easy to miss these tiny moments, but without a doubt I will carry them with me forever. 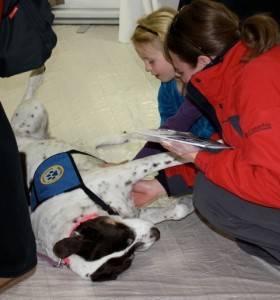 When Tilda first started working as a therapy dog at Avista hospital in Louisville, Colorado, she was about the 2nd active dog team visiting the facility as that therapy dog program was just getting ready for a rebirth. One day a very nice lady named “Ann” saw us in the hospital hallways and invited us up to Dr. Nelson’s Pediatric office to visit with staff and patients in that area. Tilda really enjoyed it as there were children, treats and lots of fun. She loved laying on the floor on her side while the kids rubbed her belly. She also loved demonstrating her tricks for the kids such as “high five”, “high ten” and “high twenty”. The children enjoyed it very much and some actually thought she could count. In the pediatric office area, it is always filled with wonderful sounds of joy and exuberance and the crowded little hallway between the exam rooms is filled with staff, children and parents all enjoying the antics of that scenario. Tilda always was given treats from the staff of Brenda and Ann, then the children had their turn so it was an event for Tilda (and myself of course). Dr. Nelson was always busy with patients, but he showed lots of tolerance and understanding working around and through the crowd in the hallway to get to his next patient examination room.

Then one day, Dr. Nelson himself gave Tilda a treat and from that day on, it became a tradition that Dr. Nelson would always give one treat to Tilda and then went back to his patients. Tilda looked forward to that moment and anticipated it on every visit. Of course she would sit pretty like a little soldier when Brenda or Ann were feeding her treats. Those were golden moments for Tilda.

Tilda visited this office every week for a good long time, but then day came when Tilda was not able to visit anymore due to her illness. However, Tilda was followed by many, many good therapy dogs that were fast coming into the Avista program and we led them all in the direction to Dr. Nelson’s office on the second floor so they could do their magic with the dogs and visa-versa. All the dog handlers simply love going to Dr. Nelson’s office and the dogs can almost find that office by themselves without the handler I would bet. 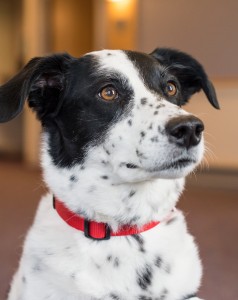 Then early in 2012, Sissy-Biskit started visiting at Avista and of course was introduced to Dr. Nelson’s office and the children. Sissy being a lot more shy than Tilda didn’t quite know what to make of all the fuss over the therapy dogs. But over time, Brenda and Ann had Cheerios which Sissy liked very much and started doing her “spins and twirls” for them and the children. The most hilarious part for us humans during this visit time was that Dr. Nelson himself would do the usual appearance with his private dog treat and would give one to Sissy-Biskit. She would spit it out on the floor and didn’t want it. One of us would finally encourage Sissy to eat it, but she simply wouldn’t eat it from Doc. This became somewhat of a comedy between us all, but Dr. Nelson never gave up. He actually purchased other treats that he thought couldn’t miss with Sissy and he finally hit on one that Sissy loved dearly. It was some sort of “meat treat” and Sissy was nuts over it.

Not too long after that day, Sissy had a couple bad incidents in other locations with some very loud sounds and with a male patient who grabbed at her aggressively before I could react. From that moment on, Sissy became fearful of men so we put her in a “leave of absence” mode for 90 days from her regular schedule at all the hospitals. I am still sporadically visiting with her for very short periods at some of the hospitals and at a memory care nursing home in order to build her confidence again.  It is gradually working.

One day in early December, 2012, Sissy-Biskit and I visited Dr. Nelson’s office for the usual fun and fanfare. I was talking with the staff and I noticed Sissy kept pulling and pulling hard on the leash as if she wanted to go to the back of the area. I kept pulling her back and she would turn and pull again. I finally asked if there were any patients in the office today and the answer was “not right now” so I just dropped the leash as I knew Sissy would be fine as she headed back towards Dr. Nelson’s private office. The staff and I finished our conversation in a minute or so and I headed down the hallway. As I turned the corner to Dr. Nelson’s personal office, I saw the most amazing sight. It was one of those moments whereby the image of it speaks a thousand words and will stick in my mind forever. Dr. Nelson was sitting in a chair out in front of his desk with his special treats that Sissy loved so much. He was having Sissy “sit”, “shake”, then come up on his knee all while he encouraged her to nibble the treat out from between his fingers. Sissy’s tail was wagging high with her ears perked and erect. What I saw was a dog and a doc having a very special moment with each other and both were smiling. This from a Doc who had been rejected by Sissy but he wouldn’t give up… and from a dog who was presently fearful of men.

While you may be preparing yourself that this is the end of this story, it isn’t. On December 13th, 2012, several of the Avista therapy dog teams attended the event of Santa Claus coming to Avista to listen to the children’s requests while they sat on his lap. The dogs entertained the children while they waited in line for their turn on Santa’s lap. I was given the wonderful task of taking pictures to document the joyous moments of the children with their eyes as big as saucers with some only peaking at the large white beard out of the corner of their eye. It was adorable. Then all of a sudden, out of nowhere, came Dr. Nelson walking through the crowd and he walked over to Santa and pulled up a seat on Santa’s lap himself as shown in the great photo on this page. I couldn’t resist snapping a photo and as the Doc left I wished him Merry Christmas and shook his hand while saying “I will get this picture to your office soon” and we both had a good laugh.

On December 17th, 2012, Dr. Nelson experienced some serious medical issues and was hospitalized. He passed on out of this life on December 24, 2012. His memorial service is today, December 29th, 2012 and is the reason I stopped everything to document the wonderful moments experienced by Tilda, Sissy-Biskit and all of the dogs in the Avista Animal Helpers therapy dog program who visited his office. While it is a time for some very strong emotions, the memories of it will continue in all of us for a very long time. Hopefully, Dr. Nelson’s office will be able to continue the great pediatric service and the dogs will be able to continue to visit in his honor and as a tribute to an individual we all hold in high esteem.

A special thanks to Brenda and Ann of Dr. Nelson’s office who always welcome and greet the dogs with fanfare and lots of fun.  Thank you, Dr. Nelson!  Your memory is etched inside us for all the good things you’ve done.  Also, a big thank you to all of the Avista Animal Helpers dogs who so graciously dedicate their time and effort to bring smiles to the faces of people needing a break in their day.  Here are a few of the dogs presently doing this wonderful work at Avista (in no particular order):

Thank you, Tilda! Thank you, Sissy-Biskit! Thank you both for the moments that sit in this man’s heart forever!

Happy New Year to Everyone!

This entry was posted in Working Dog Stories. Bookmark the permalink.