A Nice Lady Speaks to Tilda With Sign Language 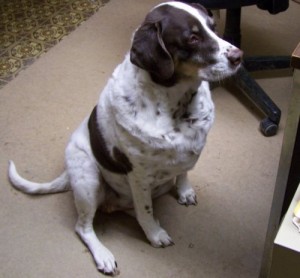 As I have said a few times before, one just never knows what the day brings when showing up with Tilda to do some therapy dog work. Sometimes it is simply a great event giving opportunities to meet a lot of very nice people (occasionally some not so nice also) and then once in a while that special moment comes out of nowhere grabbing at your heart strings until the hairs stand up on your arm and the tears begin to drip down your cheeks.

Tilda has visited several hundred people since I last wrote about an incident. When she works 4 days most weeks for a couple hours each day, there is a great deal to observe. While it is all very special most of the time bringing lots of smiles, laughs and loving time sharing, last Friday (Feb 11, 2011) was one of those special days when things were lined up perfectly for some very special moments. How those special moments come about is still beyond me. I don’t understand it and I don’t for one minute pretend to have a clue what is going on. I just pay attention while witnessing it and report it as fairly and accurately as I can.

As we were making our rounds, we stopped in the Intensive Care Waiting Room in the hospital. It was very dark in there and at first I thought there was no one around, but as my eyes adjusted to the light I could see one elderly lady sobbing in one corner of the large room and another man and wife couple on the other side of the room. The man was sleeping on a sofa and his wife was seated in a chair next to him. Since the elderly lady was having a sad moment, I led Tilda towards the other couple first. That lady saw Tilda immediately and had this wonderful smile on her face. As we approached the lady, I asked her if she would like to meet Tilda, a therapy dog here at the hospital. She immediately made it clear to me that she could not speak and could not hear and then motioned with her hands for Tilda to come closer to her which Tilda did immediately. I thought to myself that this was a challenge that I haven’t had to deal with before and was wondering how I could make the visit meaningful to the lady. I knelled down and lifted Tilda’s Volunteer Badge so the lady could read it, then I showed the lady Tilda’s collar tag from Therapy Dogs, Inc that says “I am a therapy dog”. The lady was then very excited and started signing to Tilda and Tilda immediate moved right into the lady’s lap with her head and neck and starting being very sweet to the lady. The lady then held Tilda’s head in her hands and they both just looked at each others eyes for what seemed like a good long time. Tilda normally doesn’t allow that for more than a couple seconds. It caught my attention wondering what was going on and just that fast, Tilda drew back, sat upright and took both paws and raised up in the air and gave her paws to the lady on her lap. That was my clue to watch closely. When Tilda does that, something is going on and it is a special moment. Right at that moment a doctor walks in, turned the lights on and wanted to talk to the couple. I tugged on Tilda’s leash to break up her endeavors and waved goodbye to the lady and she understood we were leaving and waved back. Tilda and I left the room to allow privacy for the doctor and family.

About 30 minutes later, we came back to that room. The elderly lady was gone, but the couple was still there only this time the man was awake and sitting upright next to the lady. About 10 feet from the lady, Tilda charged her in a very playful manner. It all happened so fast the leash went tight and I couldn’t keep up with her. At the same time the lady was signing to Tilda as fast as she could while sliding down off the chair and on to the floor. They both sat and hugged with Tilda putting one paw up on the lady’s shoulder and then began licking her face while the lady was hugging Tilda and lovingly wiggling her from side to side as if it were a “welcome home” event after a long absence. Then just as quick as this explosion of affection happened, it ended just that quick with both sitting on the floor facing each other and just staring into each others eyes again. Tilda was motionless, just staring, no expression except maybe a calming sort of expression. Then the lady began signing to Tilda again rapidly right in her face and Tilda just watched intently and never moved a muscle.  I couldn’t believe what I was seeing as this response with all that hand waving and gyrations no dog would sit still for that long. Then suddenly the lady stopped signing, put her hands on Tilda’s shoulders and they just fixated on each others eyes again. No movement from either, just a solid stare with their faces about one foot apart.

Then suddenly the lady started aggressively signing to her husband. She was trying to hurriedly tell him something and he motioned back to her with an expression on his face like “what did you say?” She quickly signed some more to him and then looked back into Tilda’s eyes again. All these moments, Tilda has not moved a hair—nothing, just sitting intently and staring. The man shook his head “No” to the lady and it looked to me like he did not want to do what she was asking him to do. I could tell now that she was insisting and was pointing at me also in between hand signs. The man finally spoke to me saying “I want you to know I don’t believe in this sort of thing, but she is telling me to tell you that this dog Tilda is speaking down deep inside her and it feels to her like a large burden has been lifted from her”. As the lady is now looking at me I replied to the gentleman to please tell her that I understand. He did so in sign (at least it appeared he did) and then I immediately gave her a thumbs up gesture and she immediately grabbed Tilda and gave her a big hug while tears started to run down her face. Well, that did it for me as the tears came rushing out and as I looked at her husband, he was wiping his eyes also. The lady jumped to her feet and gave me a big hug and clearly mouthed “Thank You” to me with her happy tears running down the cheeks.  There was no doubt about what this moment meant to her.  Tilda was then ready to go so we waved our goodbyes and walked out of the room. We both went to a quiet place in the hospital and took a 10 minute break. Tilda actually fell asleep in that short time.

Later, we returned to the room and it was once again empty. People come and they go in life and sometimes the paths cross.  Most likely Tilda and I will never see these folks again, but we both know that for just a few minutes something very special took place that was great for all involved.